Bitcoin as a possible investment 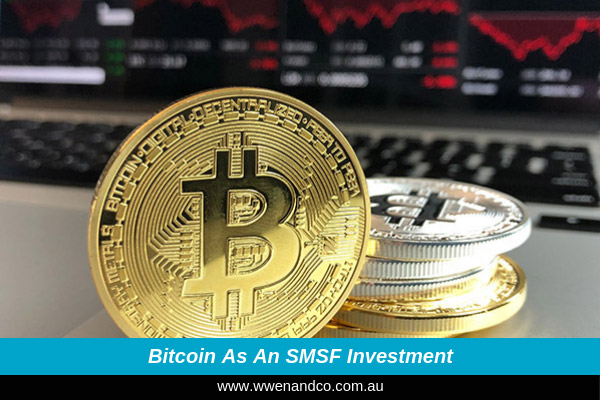 Is Bitcoin a suitable investment for your SMSF?

The dramatic rise in value (and then fall) of bitcoin and other cryptocurrencies has sparked interest among SMSF trustees on its potential as an investment medium, particularly in a marketplace of low-interest rates, erratic share markets and an easing in property values.

While bitcoin may be the most well-known cryptocurrency, there are nearly 1,500 in existence. In its simplest form, a cryptocurrency is a “peer-to-peer electronic cash system”, which means that the currency is not in a physical form like cash but sits in an electronic register.

Blockchain is what makes bitcoin work

What makes bitcoin work, where previous attempts at electronic cash did not, is in the magic of something called blockchain. One of the problems with earlier electronic cash was that it was possible for those with the skills to fool the system and allow multiple transactions of the same piece of currency.

Bitcoin and other forms of blockchain get around this. Rather than having a central ledger of all transactions, blockchain relies on a decentralised network of ledgers, all of which have a complete record of every transaction of every bitcoin. Every one of these ledgers must be the same before the system recognises a transfer of a bitcoin or part thereof. There is extensive cryptography to secure the transactions.

As a digital currency, bitcoins are sent and received via digital addresses. The system uses public key cryptography to make and verify digital signatures used in bitcoin transactions. Users are assigned a private access key enabling access to Bitcoins stored in a digital wallet. Users are able to transfer money without utilising centralised banks and third-party payment channels.

Pros and cons of bitcoins as an investment vehicle

To further enhance the system, there is a permanent limit on the number of bitcoins that will ever be created. This ensures that the value of the bitcoin isn’t destroyed by the electronic equivalent of just printing money. The consequence of this, however, is that bitcoins are scarce. As we know, if a commodity is scarce but in demand, the value of that commodity will increase, as we have seen with bitcoin and other cryptocurrencies.

The problem this creates though is that the commodity can be used for speculative purposes, which isn’t bad when you buy low and sell high but can be very damaging in a boom-and-bust scenario of investment bubbles.

The other thing about bitcoin and other cryptocurrencies is that ownership can be relatively anonymous, with the ability to hide transactions from governments and regulators. For this reason, it is favoured by crime syndicates, money launderers and terrorist networks (and the odd white-collar criminal too). It is this element that has bought cryptocurrencies to the attention of regulators and why they may in the future be subject to regulation.

Bitcoins and other cryptocurrencies are subject to double taxation

Cryptocurrency in Australia had until recently been subject to what was labelled “double taxation”. Legislation effective from July 1, 2017, aligned the goods and services tax (GST) treatment of digital currency with money. Before this, anyone using cryptocurrency as payment effectively paid GST twice — once when buying the bitcoin and again on its use in exchange for goods and services subject to GST.

The ATO deems bitcoin to be neither money nor foreign currency but also holds that it can be regarded as an asset for capital gains tax (CGT) purposes.

A far as conducting transactions with bitcoin, the ATO states that it views such transactions as akin to barter arrangements. In conducting a business transaction, therefore, the same process would be followed as when, for example, receiving a non-cash consideration under a barter transaction, with the consideration recorded at fair market value. This can be obtained from a reputable bitcoin exchange.

For individuals, when buying items online for personal use or consumption, there is generally no income tax or GST implications. Any capital gain or loss realised by disposing of bitcoin is generally disregarded — as a personal use asset, provided the value of the bitcoin is less than $10,000.

ATO advice is that certain records should be kept for any bitcoin transactions:

Considerations for investing in cryptocurrency

The dramatic rise in value (and then fall) of bitcoin and other cryptocurrencies has sparked interest among SMSF trustees on its potential as an investment, particularly in a marketplace of low-interest rates, erratic share markets and an easing in property values.

But its relatively short history makes it hard to predict, and there is uncertainty what (if any) future regulation will be placed on it. There are also uncertainties on how to manage cryptocurrencies within the tightly regulated SMSF space.

The ATO has made it clear that, at the moment, it cannot stop an SMSF investing in a cryptocurrency like bitcoin. There is no specific prohibition in the relevant legislation, and it is permissible as long as it meets the other rules for investment. But this does not mean there are no pitfalls for SMSF trustees.

The first thing a trustee or administrator must do is to check the trust deed. As it is a relatively new investment vehicle few, if any, trust deeds will deal with it directly, and may need amending.

It will also be necessary to review the investment strategy. Bitcoin is volatile, and in its short history, there have been many booms and just as many busts. Therefore, bitcoin only suits those investment strategies that are prepared to take risks. As it pays no income and is subject to wide variation, it is also unlikely to be suitable for fund members in or near retirement phase.

Another thing to realise with cryptocurrencies is that they have no physical assets backing them up — if they fail, you lose everything. They are only as valuable as someone is willing to pay for them, which also makes them particularly hard to value.

Personal and SMSF investments in bitcoin

Given the electronic nature of cryptocurrencies, there is a need to ensure that there is a clear separation between the fund’s assets and those of trustees. Thus, if you have both personal and SMSF investments in bitcoin, they need to be clearly separated. The ATO has highlighted this as an issue of concern, and something they will look out for when reviewing SMSFs with cryptocurrency investments.

One advantage though of cryptocurrencies is that all transactions are recorded. Therefore, they can be checked by auditors (and regulators), however, it is advisable to also keep a written note of all transactions including buying and selling prices and dates.

A concern for SMSFs investing in cryptocurrencies

A new issue of concern for SMSFs that invest in bitcoin is that given the wide fluctuations in value, a fund may unwittingly breach the transfer balance cap of $1.6 million and have to wear the headaches and restrictions that breaching the cap brings if other contributions have been made to the fund.

Warnings to SMSFs investing in cryptocurrencies

Both the ATO and ASIC have issued a warning to SMSFs investing in cryptocurrencies. They are a highly speculative investment and not recommended for those who are not willing to make riskier investments. There is little long-term history of their performance, so it is difficult to understand how they will perform over time.

Having said that, there is nothing currently preventing an SMSF from investing in cryptocurrencies like bitcoin. Just make sure you do your homework and are prepared for the risk they present. Also, be aware that while at the moment they are lightly regulated (if at all) this is unlikely to be the case long term.

This article is from Tax & Super Australia dated 13 November 2018: https://taxandsupernewsroom.com.au/bitcoin-place-wallet-smsf-portfolio/

Should you have any tax queries on cryptocurrencies, please contact the accountants at our Sydney office